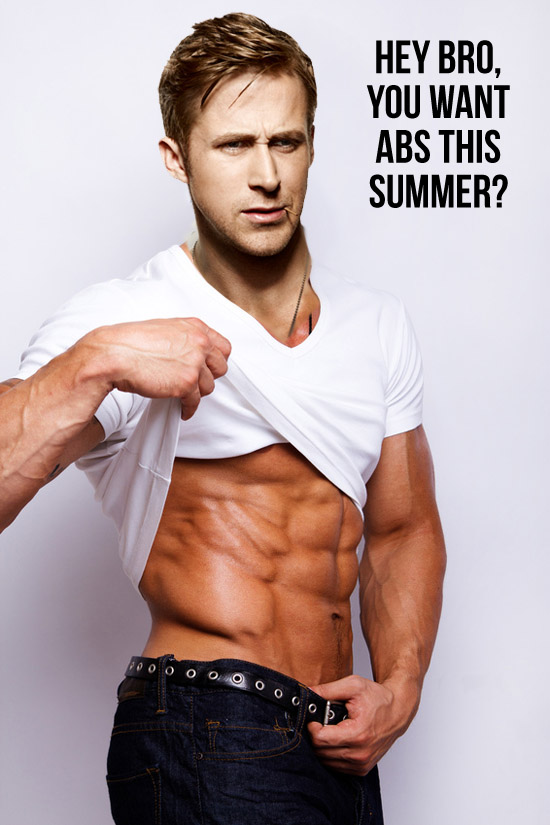 The weather is getting warmer and summer is around the corner, what better time to start getting your beach body ready than RIGHT NOW? In this article we’ll discuss the most effective and fastest way of melting the body fat and sculpting your six pack abs beach body.

We’ll analyze Ryan Gosling’s six pack abs workouts and nutrition plan and we’ll strip away the bullshit from the stuff that actually works. We’ll give you a proven abs diet and workout plan absolutely FREE. Summer is around the corner and we believe everyone should look great – if they wish to do so – so let’s get started!

“Look as good or better than Ryan Gosling.”

You may not have the perfect head of hair or the cool facial demeanor but you can all LOOK AS GOOD OR BETTER than Ryan Gosling, neck down. We found an interview with one of Ryan Gosling’s personal trainers – Ashley Borden – and she dished out some useful and some not so useful information. We’ll decipher the misleading parts to give you a better grasp of what it takes to get that set of six pack abs.

Consistency is key to anything. If you want to achieve it, you have to put in the work. (We’ll give you a much more efficient method of getting ripped for summer, and it will only take 3 hours a week).

AB – Ryan was on a very high calorie diet. He was in the middle of bulking up for a movie role, you see. Ryan was eating, eating, eating, but he was eating whole foods. Good food from the ground, like real food! Oatmeal, protein, vegetables, fruit, as opposed to crap. Hamburgers every once in a while are fine. But Ryan was a clean eater!

Clean eating is always good, but the answer was very vague. What kind of protein was he eating? Beef, fish, chicken, beans & nuts? (We’ll discuss protein intake in detail later).

AB – We were building Ryan’s movement patterns. So we go over your forward reverse lunges, I watch you do push-ups and pull-ups.

Calisthenics will only get you so far. Had Ryan been doing body weight exercises when he was on Breaker High, he would definitely NOT LOOK LIKE HE DID in his most recent films. You can still get a great looking beach body through calisthenics but you will look much leaner. You have to pack on muscle, and there’s only one way of doing that…by lifting weights.

AB – He has a number of trainers, he works with Aaron who is a super cool guy who does his STRENGTH TRAINING.

You’re probably thinking we’ll give you a set of ab exercises…WRONG. We don’t want to mislead you. The top 3 exercises for getting a six pack are: